A showcase of Projects based around Flightdeck Solutions customers. FDS customers are welcome to post their work.
Please contact pcos@flightdecksolutions.com for photo updating and posting if you require assistance.

Today was a bit of red letter day with the sim build because it is the first time I've flown it in the full configuration that I envisaged when I planned and started the build about 15 months ago. The key recent update from last weekend was the installation of a 210-degree, 4 metre diameter screen and 3 projectors using Immersive Display Pro for warping and blending. Today was the first flight after setting it up, and what a great feeling it was. My son who was first officer today took three very brief videos that show off the screen a bit...

They're not the highest quality but they give the general impression.

The build is in effect complete now. There are still a lot of little improvements, tweaks and tuning to work on, and some upgrades in the works, but it is now broadly as I planned it.

The sim consists of:

3 roughly 4-5 year old home built basic Core i3 boxes which drive the displays and CDU's. Captain PFD, ND and CDU on one, Upper and Lower MFD on the second and F/O PFD, ND and CDU on the third.
1 overclocked i7700K, GTX1080, watercooled, 16Gb Ram SSD system to run Prepar3d and ProSim. (This will be upgraded to a 1080ti next year and a further 2 identical similar boxes purchased for a wideview system).
1 touchscreen core i3 all in one PC as an instructor station/utility pc.

Main Software is Prepar3d v4.1 with ProSim. Most interfacing is native in Prosim, but I use SIOC for the OpenCockpits stuff and a custom program I've written to interface the Sismo hardware.

Apart from a raft of sceneries (all the usual suspects), I use:

I have 4 separate sound systems:

2 on the Prepar3d PC; 1 for the Prepar3d sounds and some ProSim audio ambient sounds (mainly APU, Packs, cabin ambient noise), and the other for VATSIM audio.
2 of the 3 other PC's are used to provide sound to the in-ceiling speakers (GPWS call outs, Marker sounds etc) and some speakers behind the MIP (avionics noise, some warning sounds).

Many thanks to all the people on this forum and elsewhere for the inspiration, help and ideas, most of you I don't know in person but it's great to be part of the community.

Particular thanks to all at FDS for the great service and products. They are the backbone of my sim and it wouldn't have been possible without you!

I'll post some more photos/videos soon that will give a broader impression of the sim.

So after a month or so of enjoying the sim, I've now stripped it down again for some maintenance and upgrades.

I've been working on the sidewalls, adding in the cup holder and document holders. These are 3d printed (professionally) from designs from another FDS builder, winstonc, who has uploaded them onto thingiverse. The mounting plate for the cup holder is some 3mm plexi that I had laser cut to size and shape. First photo is the initial fit before painting. 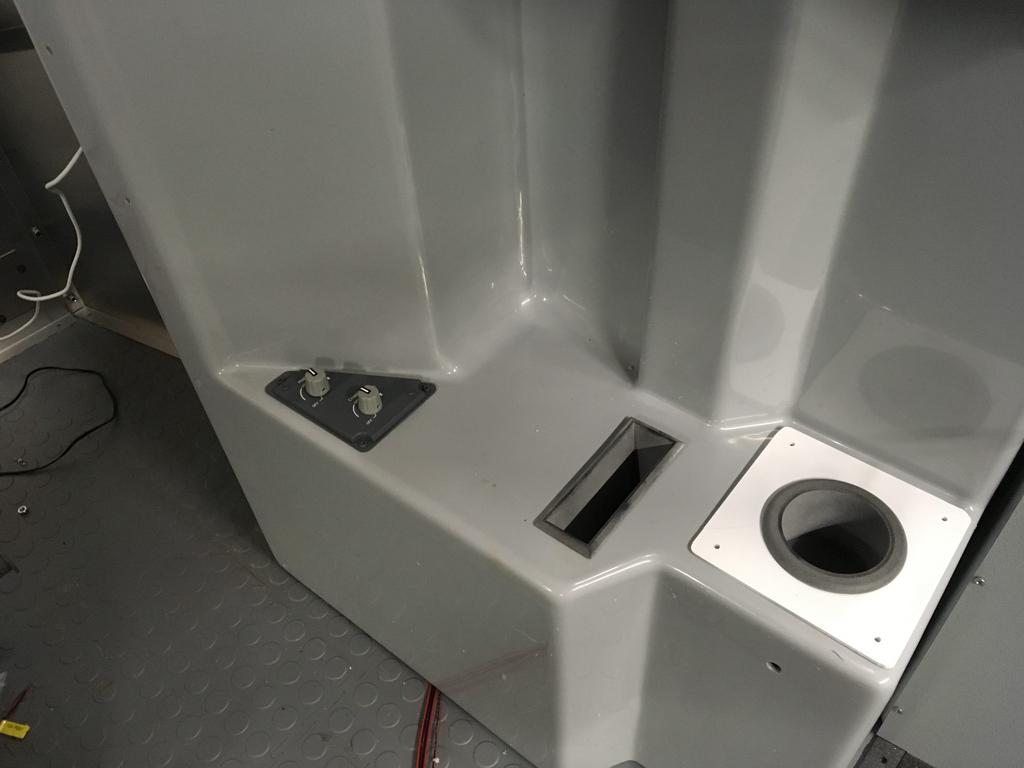 Second photo is after painting and installing them: 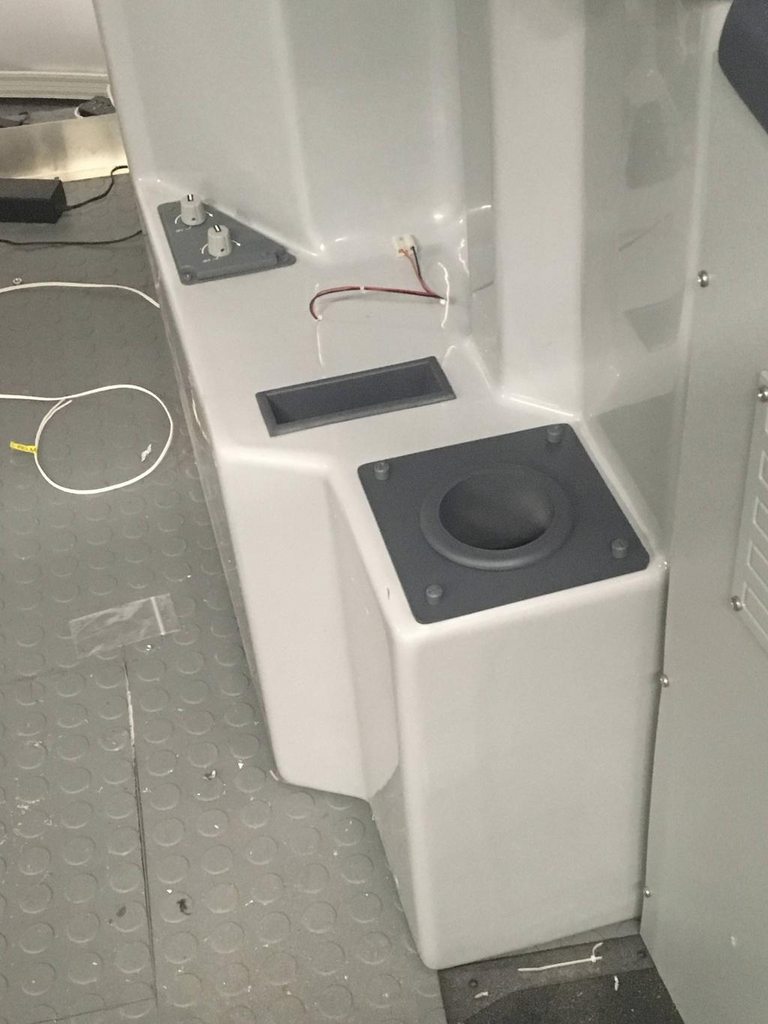 You can't see it but I've also tidied the wiring that is behind the sidewall. I've got the map light panels and dimmers, so there are 3 2-core cables leading out from the sidewall to connect elsewhere, as well as the new cable for the test switch on the oxygen mask panels, which are on order. All the cabling is now attached with cable clips to the back of the sidewall, and terminates in a junction box for easier connection.

I've also done the same on the captain's sidewall, but also have mounted a new Bodnar card that I will be using for the Tiller axis and the push-test switches on the oxy mask panels on to the back of the sidewall as well. Previously the tiller was connected to the Bodnar card that is on my rudder pedals, so this is reduces the amount of cable trailing around behind the MIP.

The main focus of the maintenance is cable management and redoing the electrical supplies. I have mounted a 12V and 5V supply onto the inside of the FDS shell, and connected them to a fusebox ( a new addition to provide fused protection for everything). Feeds from the fusebox will then be routed onto the MIP and Overhead. Picture below: 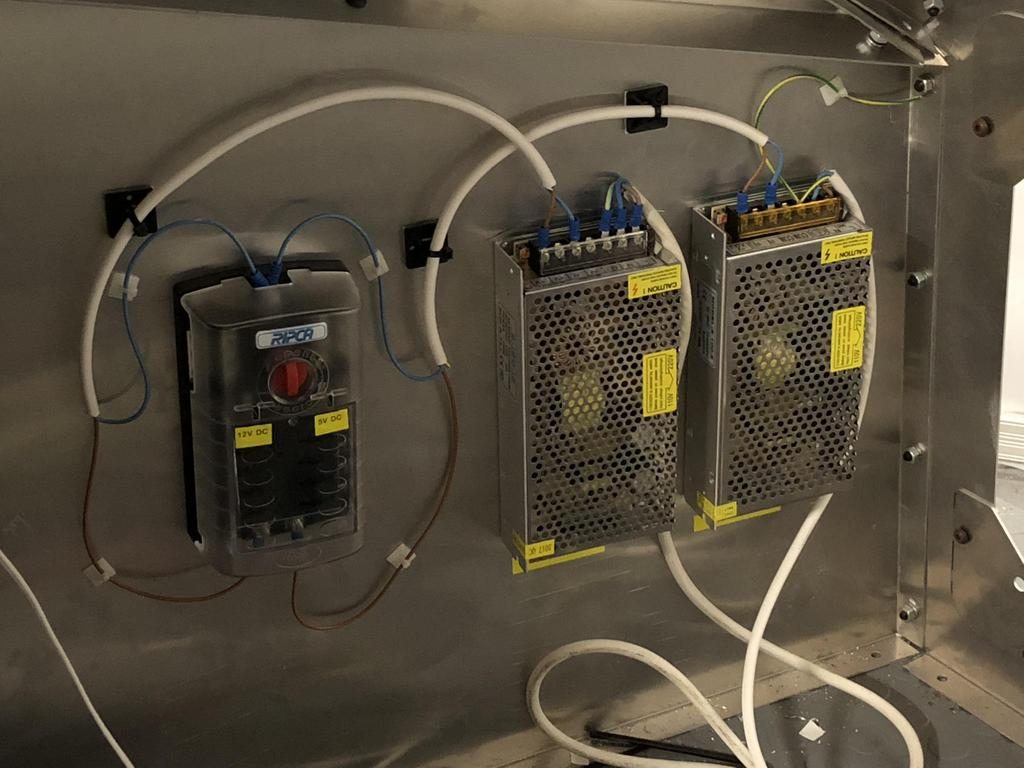 This side will supply all the LED flood lights, IBL backlights and so on that use PWM dimming. I am separating out all components that use PWM and powering them with separate supplies because I was having various issues, such as audio interference when connecting everything to one common supply.

An almost identical installation on the opposite side of the shell will provide supplies for the other components.

Will provide another update in a couple of weeks with more progress.

Glad you liked the cup and map holders.

Re your ARCHEN STARTER Switches.

Simon, Re your ARCHEN STARTER Switches.
Hey, great job Simon. I've been building for many years & still not finished.

Do I need to get special software to operate the Switches?
I note that my last Sim-A update v1.85 also installed Phidgets, is this all I need? But how do the Relays get their N1 data or or rather what activates the Relays?

Would it be possible to include any pics of how they're connected should you have any. If you wish to email me directly it's hschristian@gmail.com

Sorry for the delay in responding, I havenâ€™t checked the forum for a few days.

In terms of controlling the starters, I use ProSim software so I canâ€™t help in terms of SimA, but Iâ€™m sure someone else can chime in.

Wiring is straightforward; I take the 12v +ve line into the Common of one of the relay terminals. Then a feed from the â€˜Normally Openâ€™ terminal on the relay into the solenoid on the start switches, and then back to ground from the solenoid. Important thing is to put a diode across the +12v/GND feed on the solenoid ; Anders supplies the diodes and a diagram showing where and in which direction to put the diode.

I donâ€™t have access to the sim at the moment but a picture wonâ€™t help much; itâ€™ll just show a bunch of wire and a terminal block.

Could you explain how you wired your diode

Are you saying connect the diode across the Pos & Neg cables?